Eric and I signed up for a long range shooting school that is oriented to make you a better hunter at ethical ranges.  It's a little bit different that some other schools that are more oriented to precision long range bench shooting.  It was really a worthwhile experience and I think that it will help a lot with my hunting - time will tell.

We did do some bench shooting to get our form whipped into shape and to develop confidence shooting at long range.  Here we are beside the 1000 yard target that we were ringing at the end of day 1. 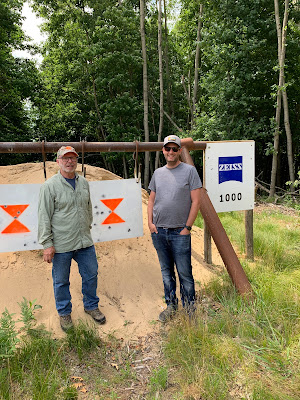 So here's some of the basics.  The school is put on by Outdoor Solutions. Outdoor Solutions - Long Range Shooting School  They offer the class in three locations - Texas, Utah and Michigan.
We chose Michigan and the class was conducted at a fabulous facility called Two Hats Ranch.  Two Hats Ranch  It is a high fence whitetail deer ranch with a super lodge and a 1000 yard shooting range.  Our shooting sessions were occasionally interrupted when some of the deer wandered across the range.  And while we were sitting on the porch in the evening, we glassed humongous bucks in velvet.  We saw one that looked about 30" wide with a large droptine on each side and more points than I could count.  There was another one who's main beams looked more like moose paddles than beams.  Just huge and still growing.  I'm not really a proponent of high fence operations but you can't help but be amazed by the animals that they grow. 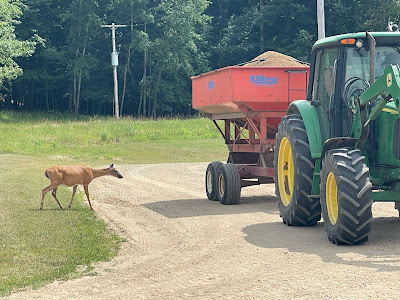 When Eric pulled in thru the gate, he stopped to talk with the ranch owner, Skipper, who was driving this load of corn/protein used to fill feeders.  While chatting with him, a doe wearing #44 ear tag wandered over to try to find some spillage. 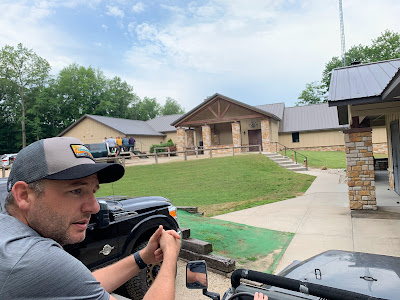 Eric sitting on a Jeep in front of the lodge.  You can see another truck with fabricated bench seats above the bill of his hat.  That's the main way that we got around the 12,000 acre property. 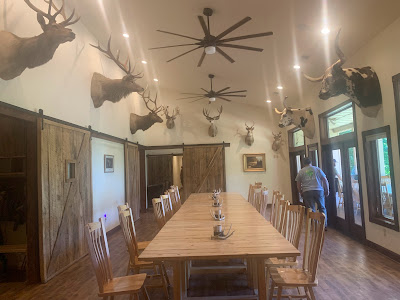 The lodge is full of mounts taken by Skipper and his family.  Our bedroom was the Serengeti room and had kudu, wildebeest, and zebra mounts. That's the dining area above and the kitchen area below.  There's a large patio just outside the dining room with another long table.  The weather was glorious while we were there and we ate outside one night. 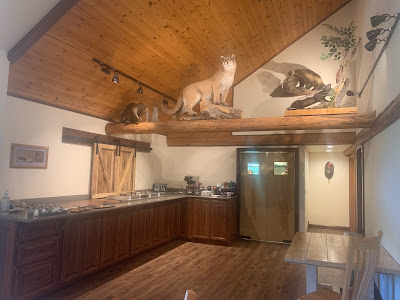 A typical daily menu.  The food was plenty and good. 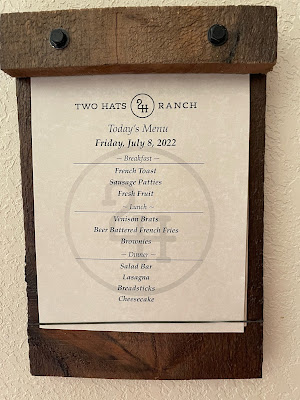 This is the shooting house at the range.  There are seven shooting positions. 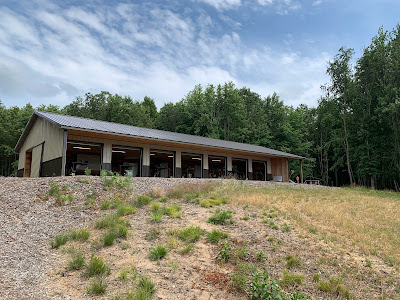 Each one has a U-shaped bench with a bass boat type adjustable chair.  We shot Benelli Lupo rifles in 6.5 Creedmoor.  They had a Jaeger suppressor.  We had Zeiss 6x to 24x scopes and Zeiss spotting scopes.  We shot Barnes match grade factory ammo. 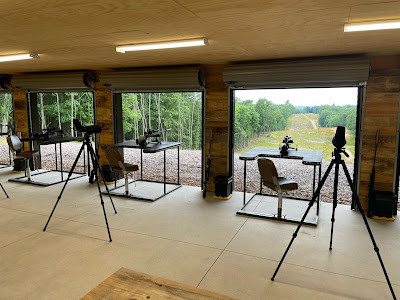 We worked in groups of two with one person on the gun and the other working as spotter on the scope.  The range had paper targets at 100 and 200 yards.  From 300 yards to 1000 yards were metal targets that were 3 MOA (minute of angle).  At 300 yards, the targets were 9" x 9".  At 1000 yards they were 30" x 30".  That was useful for making adjustments with the scope.  In addition to those targets on the range, there were some animal silhouette targets at various ranges (see the bear and hogs in red circles below).  The silhouettes were plywood cutouts and there was a hole the size of the animal's vitals. Behind that hole was a metal plate.  Silhouettes like this were used for the practical course on day 2. 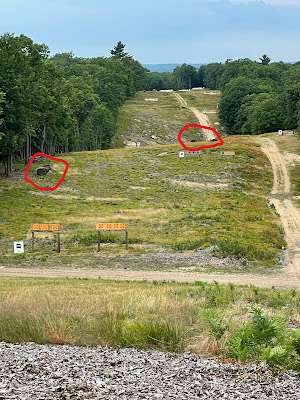 We had one instructor for each 4 shooters (two teams of two).  The instructors were all ex-military snipers who seemed to have met each other while doing post-military contract work for the State Department, etc.  Brett, Mac, Ryan and Anderson were all very good.  The Outdoor Solutions owner, Greg Ray, was also available and was another great resource.  Brett was the lead instructor.  He  did the class instruction and "fed us from the firehose" - but he kept it fun and safe. 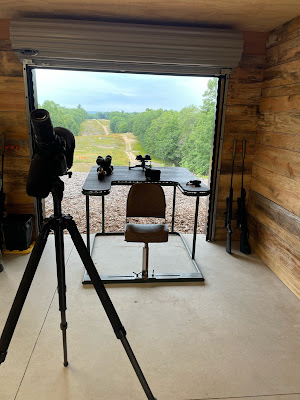 Day one was spent on the range getting familiar with the equipment, getting advice and instruction on shooting form, and gradually walking out from 100 yards to 1000 yards in 100 yard increments.  This was all about using the GeoBallisticsArc App to calculate your "dope" and then dialing the scope for the range. Ballistics Arc App  We had very little wind so we didn't have to do much in the way of wind compensation.  Ryan was a patient and effective teacher for Eric and me. 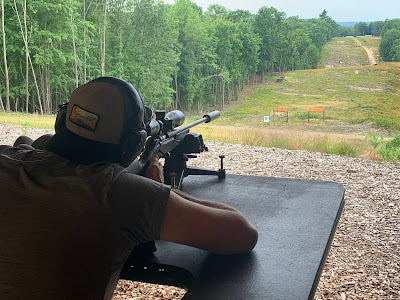 Below is the 1000 yard target stand but there was one like this at each distance.  We were in shooter position #7 so we were always shooting the rightmost target.  In addition to shooting the plates at each 100 yard increment, we also shot the silhouettes at odd ranges. 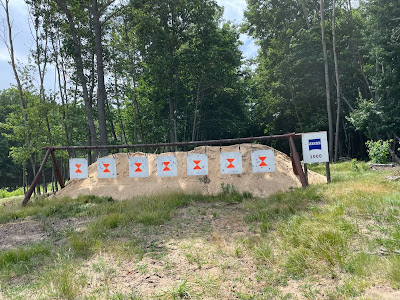 First day was a confidence builder.  Every shot was taken with an absolute solid rest off of the bench.  But we learned that when solid, we could reach out there and touch stuff at extreme ranges. 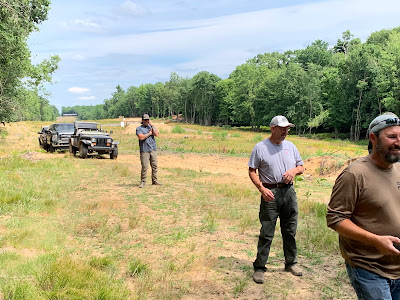 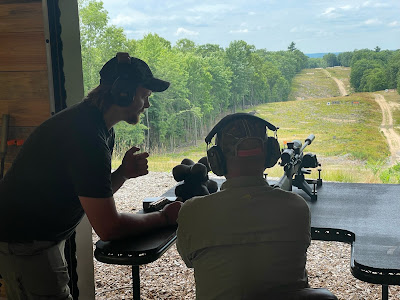 Ryan demonstrating extraordinary patience.  Tom Off Bench
There were also hazards inside the lodge. 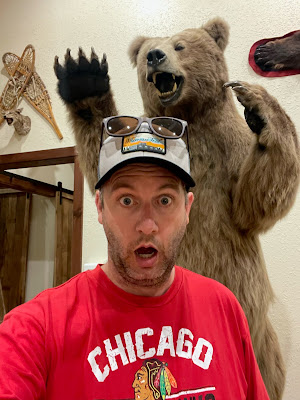 Day 2 was practical field position stuff.  It was almost like a sporting clays course.  There were silhouettes of various animals at various ranges from about 150 to 500 yards.  There were obstacles to shoot over or under or in between.  We could always find the spot we were supposed to shoot from, but it was sometimes difficult to spot the targets in the shadows in the brush.  Some stands had two targets at two very different ranges. 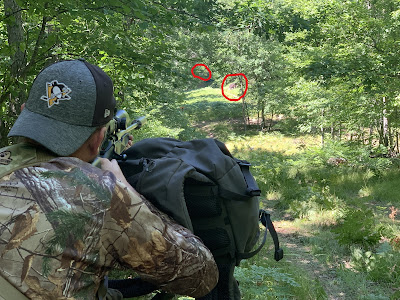 I chose to dial my scope to a 300 yard zero and then hold over or under for the range.  I thought that was a more realistic hunting scenario than getting out your phone to look up the scope dope and then dialing. 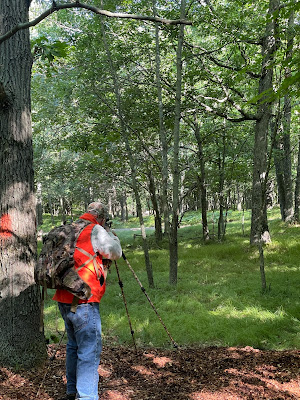 We shot from all positions - prone, kneeling, sitting, standing and even a tree stand. 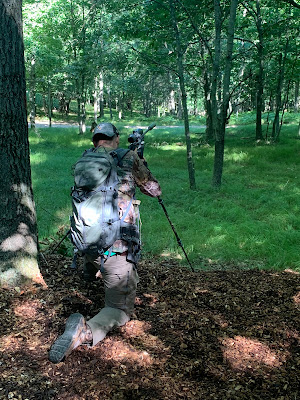 And in order to make it like a real hunting scenario, we had a couple of calamities.  The soil was all sand - almost like a sand dune.  The truck would occasionally get a little stuck.  One time when backing up to get out of a rut, Ryan backed the stair to our fabricated bench into a sand pile.  That slipped the whole metal bench assembly forward on the flatbed and put the bench thru the truck cab windows.  Oops. 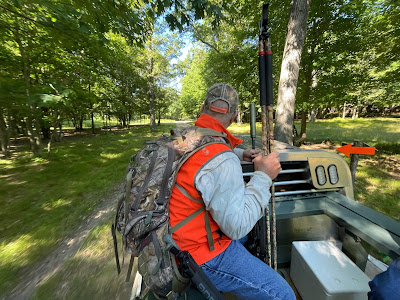 Later, we just absolutely buried it.  So we got off and walked to the next station while Skipper and Colby got the John Deere to pull it out.  Seemed like an authentic hunting trip.  And just like hunting camp, the guys didn't hold back on Ryan who was doing the driving. 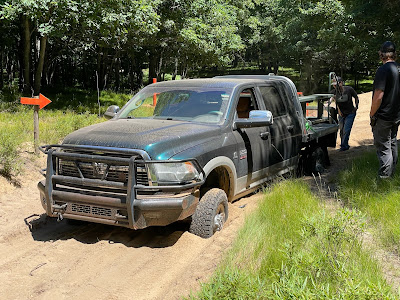 But the shooting was very good practice and we learned various ways to set up and brace our guns. 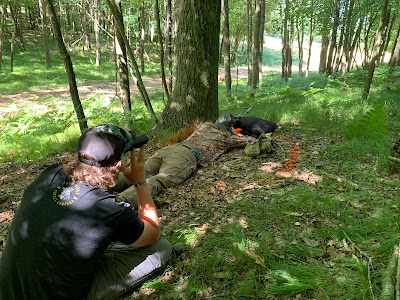 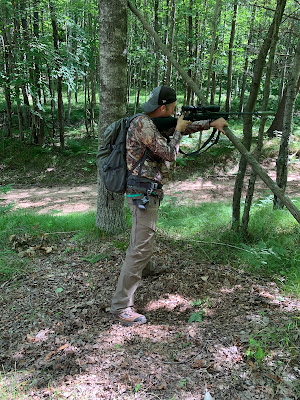 There's something very satisfying about a "ding" when you hit the metal plate. 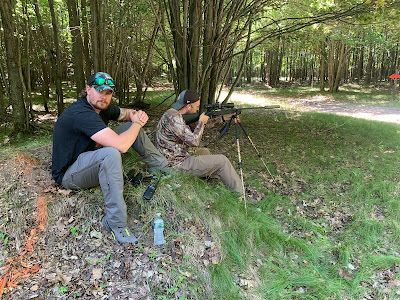 Finally we came in to the range and practiced doing holdovers versus dialing.  Then they held a competition.  On a count, all shooters had to shoot a 400 yard target and then hold over to shoot a 700 yard target.  If you missed either target you were out.  If you were the last one to finish, you were out. So we went thru several eliminations and came down to the last two shooters - Eric and Mike.  I was on the scope and had to call Eric's hits.  Mike missed and I couldn't see a hit for Eric.  Luckily, one of the instructors was on another scope and saw Eric's hit - he won Top Gun.  Eric thought that meant he got to keep the Benelli but he got the same tee shirt and certificate as the rest of us. 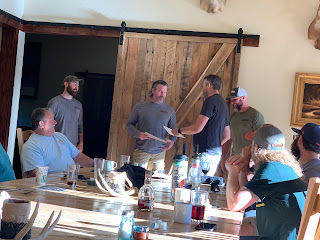 Anyway, it was a great experience and I highly recommend it.  Instructors were awesome.  Facility was perfect.  Food was great.  Even the weather was wonderful.
Posted by Tom at 6:18 PM 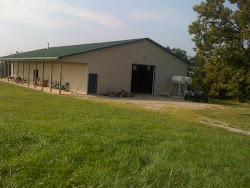 Tom
I'm a weekend farmer and neophyte forrester/game manager/hunter. This blog is about activities that go on at my 195 acre farm in south-central Ohio and other nature, conservation & hunting events.